The University of Iowa received 672 public records requests for the fiscal year ending June 30, 2016, a 44% increase from FY 2015’s 466 requests.  653 requests were closed in FY2016, including 11 requests that were still pending at the end of FY2015.  Requests completed with responsive documents totaled 527.  Records weren’t available for 54 requests, 45 requests were withdrawn or deactivated due to lack of payment, and 27 requests were denied. 30 requests received in FY2016 were still pending at the close of the fiscal year.

Overall, the number of public records requests received in one year has more than tripled since FY2010. 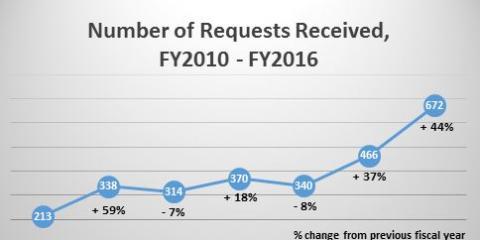 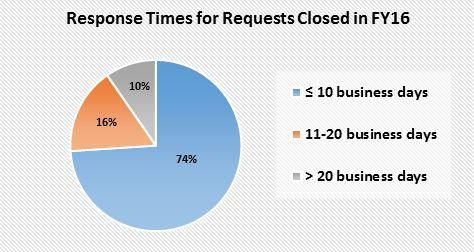 For the first time in a fiscal year, the category of Purchasing had the largest share of public records requests.  154 (a 75% increase over last year) requests received in FY2016 were for bid results, vendor contracts, or other purchasing-related information.  Public Safety was the second most requested category, which saw an increase of 58% over last year (from 65 to 103).  Part of this increase is due to a recent decision to process requests for accident reports as public records requests, in addition to police incident reports.  Athletics, which had been the leading category in past years, fell to third this year.  Athletics-related requests (including coaching contracts, athletics financial reports, etc.) fell by 18% compared to last year (99 requests, down from 121 in FY2015).  Requests related to Student Services (including directory information), and Administration (including the presidential search and selection process) rounded out the top five most requested categories. 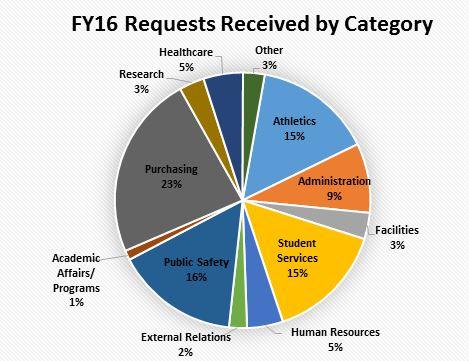 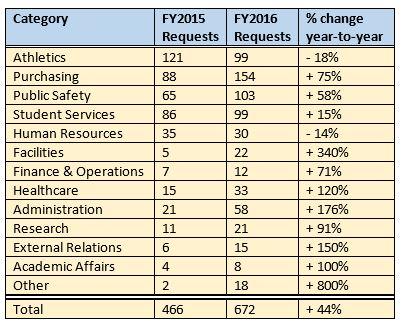 225 of the 672 requests received in FY2016 came from the media: 161 from Iowa reporters, and 64 from out-of-state reporters.  208 requests came from businesses/vendors (mostly bidders and companies requesting student directory information), a 46% increase from last year’s 142 requests.  Other common requestors included attorneys (37 requests), individuals affiliated with other colleges/universities (34 requests), and government/military agencies (16 requests).  Private citizens, or individuals with unknown affiliation, accounted for 132 requests (20%). 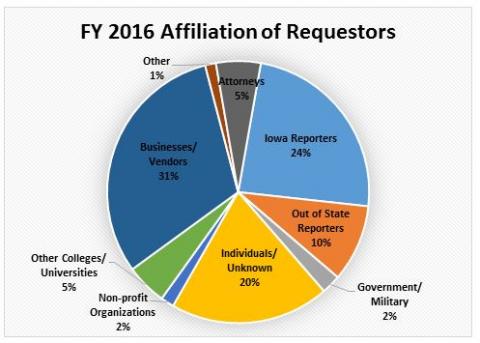 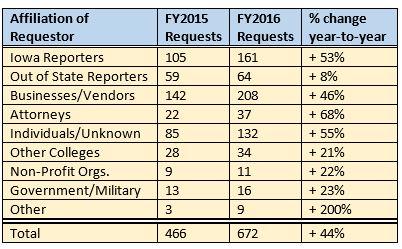 Past statistical reports are available here. 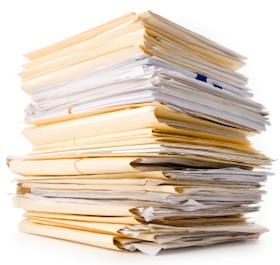 Statistical and Other Reports